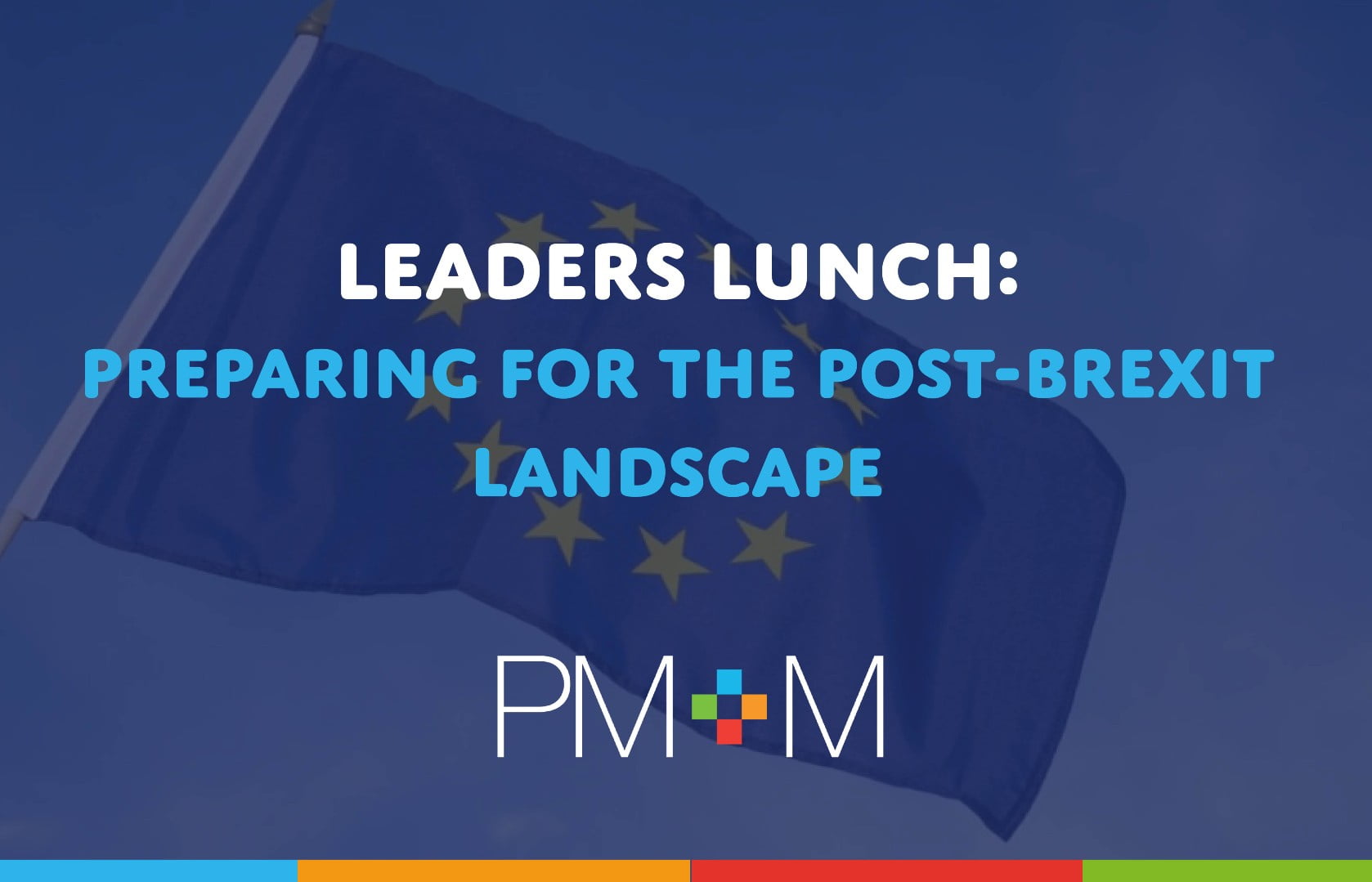 It is now less than three weeks until massive changes in trading terms between the UK and the EU. On 9 and 10 December, PM+M’s International Liaison Partner, David Gorton, hosted interactive discussions that brought together business leaders wrestling with the expected Brexit changes for their businesses.

Participants in the discussions ranged from multinationals changing how Polish factories supplied UK customers to bakeries wondering how to keep customers in Ireland and the Netherlands, from food and animal food suppliers into Southern Ireland to a niche e-retailer supplying customers across Europe.

The most striking thing in the discussions was actually how well prepared most businesses were given the circumstances – no-one thought that they were fully prepared and everyone had significant uncertainty arising from the prospect of a “no-deal” outcome.  But in almost every case, businesses had done a sensible amount of planning given the specifics of their business and were in a position that they would be able to maintain the business and adapt it quickly and appropriate in January when the situation is hopefully clearer.  The things that weren’t prepared for are largely the areas where no preparation is possible as the government hasn’t yet done its job.

The biggest concern that seemed to be felt was the simple logistics of moving goods.  Many importers had seen dramatic rises in costs of freight and of containers and there were also delays being reported in goods coming through – no-one had anywhere near the problems that Honda are reporting and all factories were still operating but there was a lot of uncertainty.

These logistics concerns were matched with an awareness of the significant administrative burden for relatively low value exports and businesses were looking at minimum order quantities and the viability of next day delivery commitments.

At PM+M we were expecting that the data requirements of exporting post Brexit would be a problem for businesses but in Lancashire there seems to be a lot of global exporting as well as European so businesses generally already had the data that they needed for customs classification and to support certificates of origin.  This may be an area where the smaller and less prepared businesses find that they have difficulties in next year’s real world, but for now most participants who addressed this area felt that it was not that big an issue.

Very much of the discussions centred on the changing terms of trade with customers and suppliers – it is now necessary to define for each sale exactly who takes responsibility for what.  I have set at the end of this blog a great infographic illustrating the range of issues which need to be agreed between trading partners and the standard terms used to describe each of the options.  Ranging from now selling Ex-Works (so that the customers has to do all of the exporting from the UK and importing into the EU) to selling DDP (Delivered Duty Paid to the customers site) and most of the nine intermediate steps, businesses had reached specific new trading agreements with their customers/suppliers.  Factors which were considered in reaching those agreements included:

– Which business actually had the administrative capacity to deal with customs rules?

– Who needs what evidence for their own compliance? (e,g to prove zero-rating for VAT due to export, a supplier needs evidence of the goods leaving the country and so may choose to take more responsibility to have that evidence)

– Who actually has a legal capacity to settle the duty and VAT in the importing country?

– How do the terms of trade affect any special customs arrangements (if you have set up an inward processing relief or duty suspension system what evidence do you need etc?)

Most businesses had settled on several different bases of trading with different types of customer – the administration can get very complicated in this situation and we will have to see how this planning survives real transactions next year.

An interesting (or scary) issue was reported by one participant that when goods exported to the EU on pallets, the pallets need to be heat treated (supposedly to limit the risk of insect spread from other climates).  Since this has never been an issue for palletised sales previously, there are not many heat treated pallets available and there may be some more practical logistics issues (or compliance penalties) before that is resolved (it would be nice to believe that details like this were being ironed out the final stages of the negotiation).

All in all, there was clearly a lot of work which had been done and business leaders had been doing their job of assessing risks and priorities and putting themselves into as good a position as is practical.  The range of uncertainties which cannot be managed and the impact of the real world on planning will undoubtedly create a lot of volatility in the early part of next year.

Our team of experts are on hand to discuss Brexit challenges and issues facing your business. For more help and information tailored to your current circumstances, please contact David Gorton on the button below.